Here are the top online casinos and their promotions for Megaways slots. These casinos provide free spins and bonuses for Bonanza, Buffalo Rising, Rainbow Riches and other popular Megaways titles.

Most casinos feature plenty of Megaways games, and especially Bonanza and Buffalo Rising are two online slots that are easy to find at pretty much every irish casino. Thanks to the popularity of the Megaways slot games, irish online casinos are more than happy to provide you with free spins and other bonuses for playing Megaways games. These are the best Megaways casinos and their bonuses for Megaways slots. 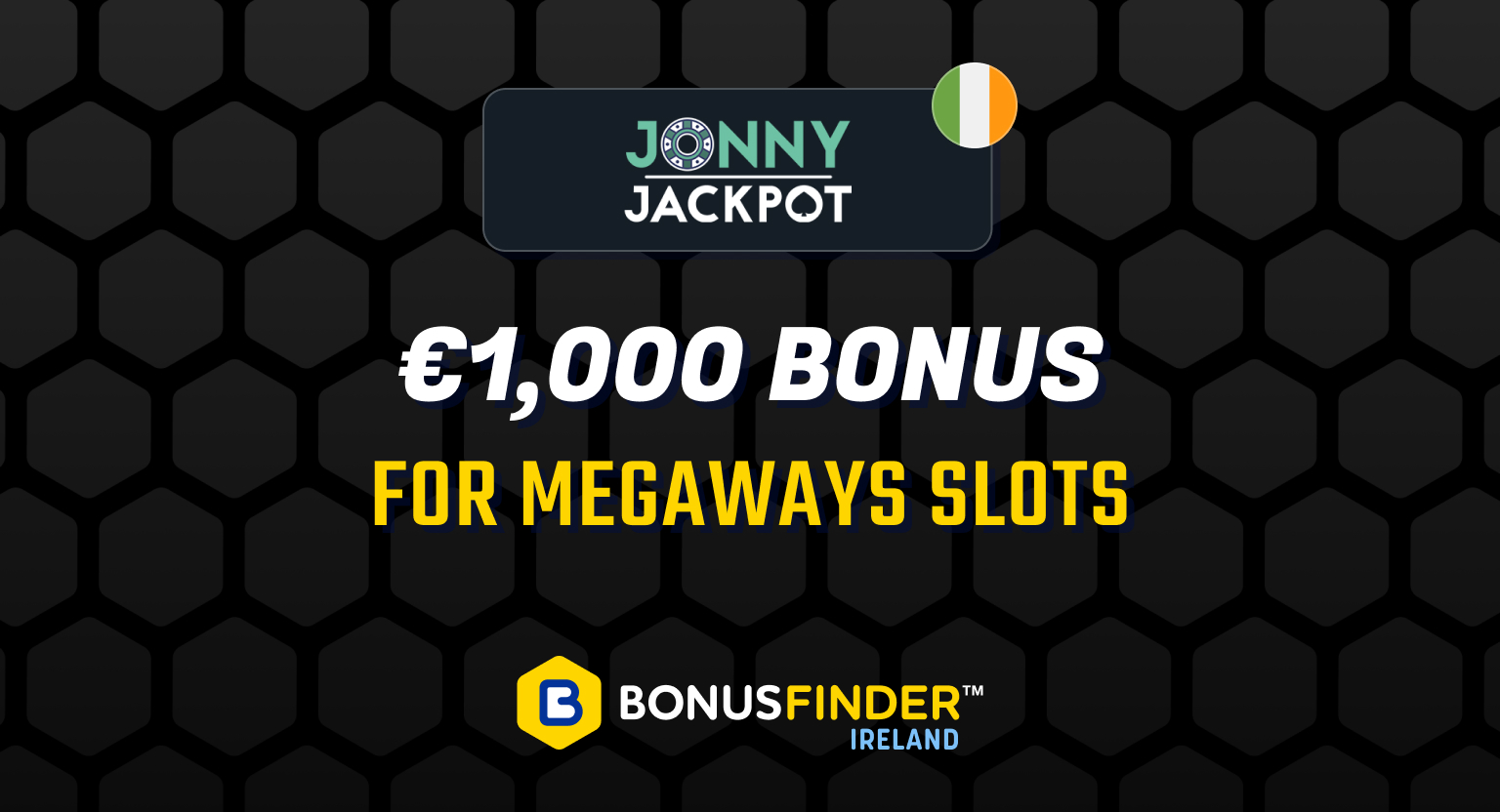 Jonny Jackpot treats new players with a welcome bonus up to €1000. This equals up to 10,000 free spins for Megaways slot games!

⚜️ What is Megaways?

The normal slot machine reel layout has five reels and three symbols shown on each reel. Megaways slots, invented by casino game provider Big Time Gaming, have six reels, and the number of symbols shown on the reels goes from 2 to 8 and changes on every spin.

Megaways slots pay from left to right no matter where exactly on the reel the winning symbol is. More bonus symbols on a reel equal more ways to win. Most Megaways slots pay the winnings from left to right, so winning combinations are easy to see. Symbols like wild scatter and mystery symbols can make things a bit more challenging to interpret, but one thing stands: more symbols on a reel is always better!

The number of mystery symbols shown on the reels varies from spin to spin, and so does the number of pay lines. Megaways slots can have a maximum of 117649 paylines. You can win one every spin to the tune of hundreds of thousands: Megaways games tend to be capped at €250.000 maximum wins. 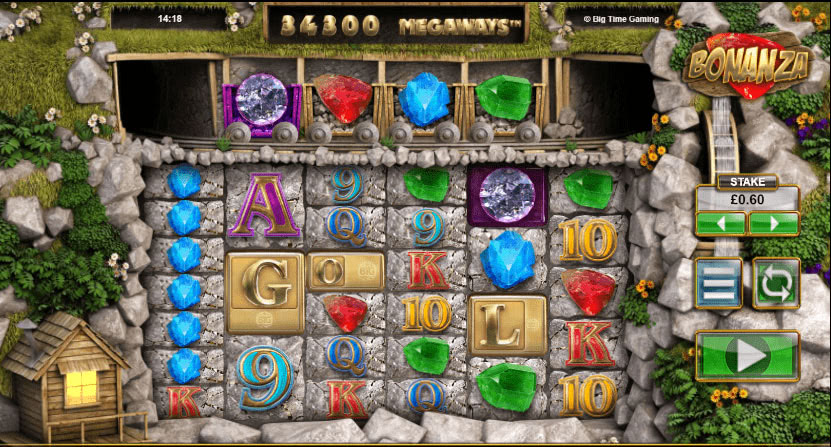 Bonanza is one of the most popular Megaways slots of today.

Megaways games are video slots packed with the latest bonus features on top of their base game. The most important of the Megaways mechanics you’ll come across playing Megaways slots is cascading reels: winning symbols disappear from the reels and are replaced with new ones. This can happen many times (cascade), and each time it does, you get a higher win multiplier. The multipliers are unlimited multipliers, and they are triggered even during free spins.

Here are some bonus features you can expect to enjoy playing Bonanza Megaways, Vikings Unleashed Megaways and other top Megaways slots:

Before playing real money slots, you can play Megaways slots for free. Free Play mode allows you to get familiar with the Megaways mechanics and find your favourite Megaways slot game.

Analysing the list we see that this list of Megaways game providers doesn’t include the biggest names in the business. The “big-3” casino game makers Netent, Microgaming and Playtech each have similar games on offer, but not true Megaways slots.

Best Megaways Slots to Play in 2023

It’s just a few years since the first Megaways slot Dragon Born was released in 2016. Since then, the number of Megaways games has exploded, and every irish online casino is filled with them. To make choosing your next game easier, here are our best Megaways slots.

If you’re unfamiliar with these kinds of video slots, it’s time to try them! They’re unbelievably popular for a reason, as they’re fun to play with each spin being different from the last.

Bonanza was not the first Megaways slot machine, but it’s definitely the best-known one and the game that started the whole Megaways frenzy. Bonanza’s cascading reels, where wins lead to another with bigger win multipliers, took irish slots players by surprise as they saw €1 spins turn into thousands of euros. Like all Megaways games, Bonanza has high variance meaning that you don’t win that often but can win a lot (maximum of €250.000).

Buffalo Rising takes advantage of the Megaways format and sports six reels with a varying number of symbols each. Key features of the Buffalo Rising slot machine include Buffalo Bet, which guarantees access to the game’s free spins bonus round feature. During your free play rounds, you have an active unlimited win multiplier, which increases spin after spin. 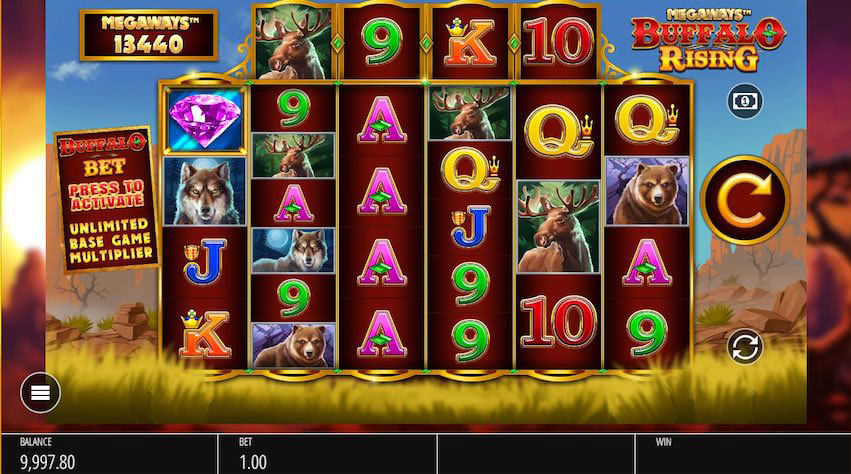 Buffalo Rising Megaways takes you to the wild west with its prairie theme. From the base game, you can also buy your way to the bonus game.

Blueprint Gaming’s King Kong themed slot machines get a sequel in Return of Kong Megaways. Like you’d expect, Return of Kong has 117.649 ways to win and a plethora of cool features. Our favourite bonus feature is the maximum multiplier of 50,000, so a €5 spin can win you up to €250,000 (which is where the game caps its maximum wins).

Fishin Frenzy Megaways is yet another popular Megaways slot game by Blueprint Gaming, that offers 15,625 ways to win. This Megaways game includes lucrative special features such as Fisherman Free Spins bonus round, win multipliers and cascading reels. With the opportunity to buy yourself into the bonus game.

Here’s a list of every Megaways slot title. These slot games are available at online casino sites that have the matching game provider in their selection (good starting points are Videoslots and PartyCasino, which have a ton of providers). The list includes two exclusive slots: Leo Vegas Megaways and Paddy Power Megaways, which can be found, respectively, at Leo Vegas and Paddy Power only. The list includes the RTP (return-to-player percentage) of each game.

New Megaways slots are released every year, and there are several fun new Megaways slots in 2023 as well. Some of the Megaways games are created by giving existing games, like Gonzo’s Quest slot game, a Megaways boost.

1️⃣ What are Megaways slots?

Megaways slots are developed by Big Time Gaming. In a standard Megaways slot, there are six reels but there's a random reel modifier that changes the number of symbols for each round.

2️⃣ What Megaways slots are the most popular?

Gonzo's Quest Megaways has become quite popular in Ireland since its launch. Other popular titles include Bonanza, Return of Kong and Diamond Mine Megaways, for example. If you want to play Megaways slots with your real money deposit, take a look at our casino bonus offers.

3️⃣ Where can I play Megaways slots?

4️⃣ Which of the Megaways slots has the highest RTP?

Megaways games have RTPs that hover around 96%. The highest RTP is 97.72% and can be found at White Rabbit Megaways. The lowest one is Dragon Born's 95.00%. Amusingly both the best and worst RTP games are by the same company, Big Time Gaming.

Fintan Costello is a gambling industry veteran and has held senior leadership positions in numerous gambling companies including PokerStars and PaddyPower. For a number of years Fintan also led the Gambling vertical at Google.

Fintan uses his industry experience as a gambling insider to oversee BonusFinder and make sure that everything is to the highest possible standards. His mission is to make sure that our visitors can “Play with More”.

We have a few exclusive offers for you